AIRFLOW is the most versatile Givi windshield to date.

The adjustable spoiler allows the rider on the fly to easily and quickly make adjustments. Made of transparent polycarbonate the adjustable spoiler can be raised 5 inches from its lowest seting. Once the desired setting has been selected a simple and secure latch system will keep it in place.

The design of the AIRFLOW system creates an aerodynamic effect that dampens turbulence allowing for maximum protection to reduce fatigue for the rider.

Another important feature is the ability to reduce AIRFLOW to the rider to increase driving safety while raining: the “spoiler effect” reduces and can often eliminate rain from collecting on the visor and reducing vision. During the warmer days the AIRFLOW spoiler can easily be removed allowing travel with only the lower part of the windshield as well. Out of stock - more coming soon GIVI A620
Add to Wishlist 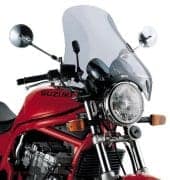